Cassie Cogan: The Tragedy of Suicide and the Opportunity for the Church to Make a Difference 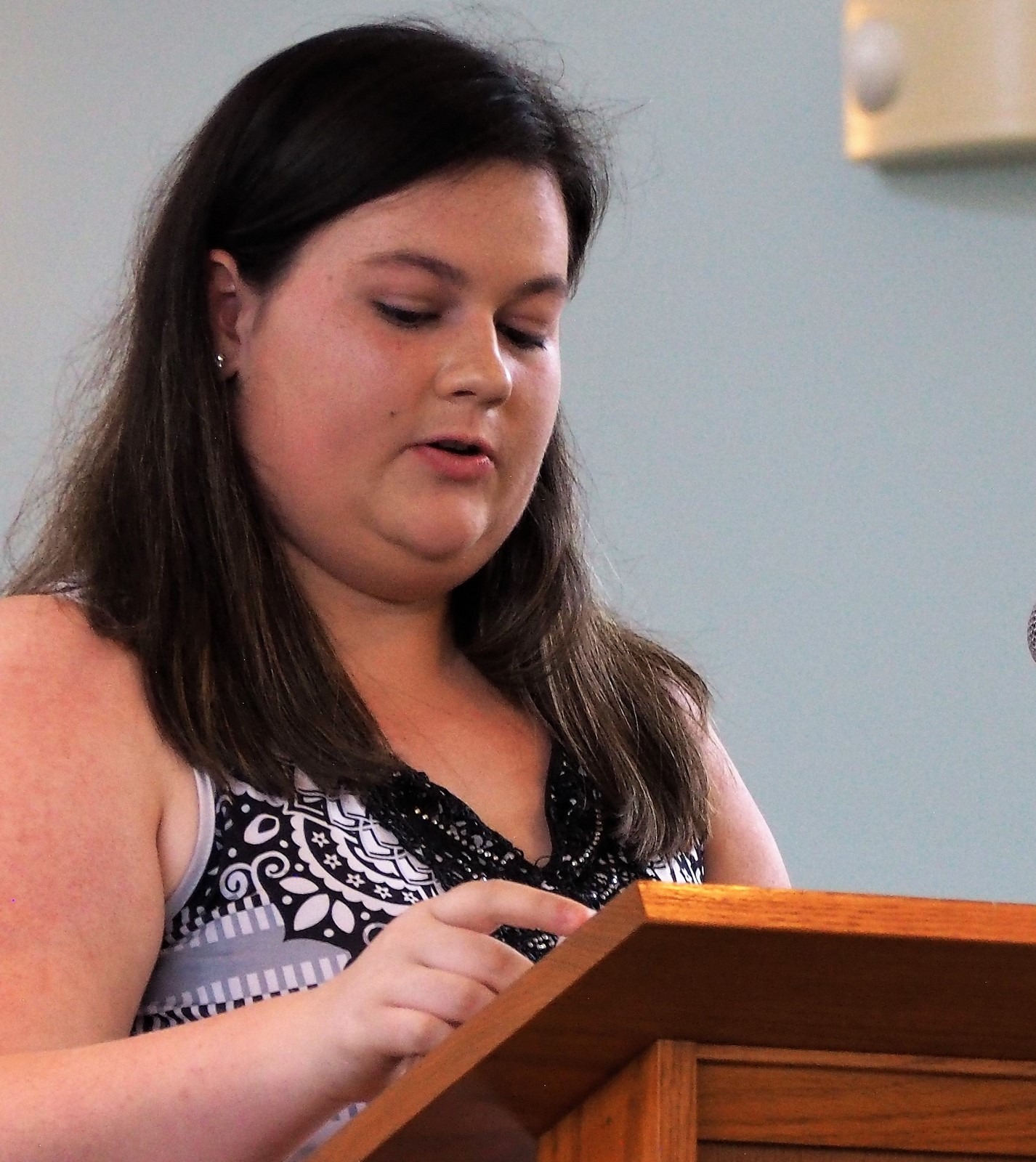 A sermon preached by Cassie Cogan on June 24, 2018 — Children and Youth Sunday –
based upon Luke 10:25 – 37 entitled, “The Tragedy of Suicide and the Opportunity for
the Church to Make a Difference.”

In the Bible, the word church is a translation of the Greek word ekklesia (ehk-is-ya) ,
which means “a calling out.” The Bible never actually refers to the Church (capital C) as
a building or meeting place, but always to people, the ones “called out” of the world’s
society by God calling them into His service. Serving God can mean many different
things: loving your neighbor and your enemy, being kind to others, not being prejudiced,
and the list goes on and on. Doing all of these things in today’s day and age seems
awfully hard to do when you really think about it. The same can be said for when Jesus
walked the Earth. Today’s scripture reading was “The Parable of the Good Samaritan”,
Luke chapter 10 verses 25 through 37, enacted by our children earlier in a skit. As a
quick reminder, I will read it again. Listen carefully:
On one occasion an expert in the law stood up to test Jesus. “Teacher,” he asked,
“what must I do to inherit eternal life?” “What is written in the Law?” he
replied. “How do you read it?” He answered, “‘Love the Lord your God with all
your heart and with all your soul and with all your strength and with all your
mind’; and, ‘Love your neighbor as yourself.’” “You have answered correctly,”
Jesus replied. “Do this and you will live.” But he wanted to justify himself, so he
asked Jesus, “And who is my neighbor?” In reply Jesus said: “A man was going
down from Jerusalem to Jericho, when he was attacked by robbers. They stripped
him of his clothes, beat him and went away, leaving him half dead. A priest
happened to be going down the same road, and when he saw the man, he passed
by on the other side. So too, a Levite, when he came to the place and saw him,
passed by on the other side. But a Samaritan, as he traveled, came where the man
was; and when he saw him, he took pity on him. He went to him and bandaged his
wounds, pouring on oil and wine. Then he put the man on his own donkey,
brought him to an inn and took care of him. The next day he took out two denarii
and gave them to the innkeeper. ‘Look after him,’ he said, ‘and when I return, I
will reimburse you for any extra expense you may have.’ “Which of these three do
you think was a neighbor to the man who fell into the hands of robbers?” The
expert in the law replied, “The one who had mercy on him.” Jesus told him, “Go
and do likewise.”

The priest and the Levite both passed the injured man, but the Samaritan stopped and
helped him. This parable teaches us multiple lessons, most importantly: help those in
need, and even your enemy can be your friend. Samaritans were actually condemned by
the Jews, so they weren’t really the exact image of a helping hand by the standards of
people during Bible times. Regardless of how the Samaritan was perceived by others, he
was the only one to help the man on the side of the road. As a Church, it is our job
together to be the Good Samaritan, no matter how difficult helping that person may be.
The Samaritan was serving God when he helped the hurt man on that road. We all are
called to serve God and to make this world a better place. However, the person that we
are helping may not look physically hurt; they could be hurting on the inside.

Sadly, as we seem to be seeing in the media a lot recently, the people who are
hurting most on the inside, often seem to see suicide as their best escape. Even if they
seem to be doing perfectly fine from the outside, that is merely the suit of armor that they
put up to appear invulnerable. All of their self-doubt and pain is trapped inside that armor
and it seems to them as though it has become just too much to handle. Even celebrities
who seem to “have it all” — people like Anthony Bourdain, Kate Spade, and Tim
Bergling, also known as the musician Avicii — can reach a point of hopelessness in which
they feel as though death is the easiest way out from their struggles. However, I am not
here to talk to you about recent celebrity suicides. I am here to discuss some scary
statistics that hit a little too close to home, and more importantly what we all can do to
help change them.

So as you might have heard, suicide rates for teens and college-age young adults are
terrifying. As a teen myself, these numbers truly scare me. But, there are so many
different ways that the Church and more specifically our church can help lower these
numbers.
1. We can reach out to the people around us. Whether we are the people hurting or
we are the willing Samaritans, (and at various times we are both) we can make it
a habit to get to know the people with whom we come in contact. .
Communication is the very first vital step in helping lower the high rates of not
only teen suicide, but also those of adults, too.
2. We can change the way that we think about suicide. We might have the thought:
“how will my thoughts change the world?” Well, when more and more of us
start to recognize that suicide does not only occur among people we think of as
weak, downtrodden, or mentally ill, we can help change the way that our whole
culture views suicide.

By serving God in this way, we not only help the hurting people among us , but we also
make the world a safer place to live. I know that our church really has an impact on lives
because my life has changed through all of you.

This past January, I returned to the Christian Retreat that I had attended last year,
but this year I went as a youth leader. One of my responsibilities was to write and give a
Talk. There are many different Talks over the course of the weekend retreat, with many
different topics. For my Talk, I had a partner. Her name was Kelsey Rapp and she is my
age and attends Denville United Methodist Church. Our topic was Agape. For those who
have never heard of that word, Agape means unconditional love. So basically, I had to
co-author a speech talking about unconditional love. God seemed like the easiest thing to
write about; he has always loved us and he always will. But when I actually started
writing and brainstorming with Kelsey, I found my thoughts turning to all of you. It led
me to talk about how this Church is not merely a building — it’s a community of loving
people. I talked about how I can see God in all of you and how he shows his
unconditional love for me through all of you. On that retreat, everyone there had their
own journey that they needed to travel, spiritual or not. But this year, I realized how truly
grateful I am to have all of you in my life. You have all already been Good Samaritans to
me and I do not doubt that you have also been there for so many others. So thank you all
so much for always being there for me and for the countless others who have felt God’s
Agape through you.

The injured man on the side of that road going to Jericho was similarly grateful
for the Samaritan who stopped to help him that day. And although the Good Samaritan
had done one good deed in the parable, he undoubtedly went on to do so many more and
help so many more people. Today, I invite us to recognize the ways we serve God by
being Good Samaritans to the people we meet as we travel along the journey of our lives.
Whether they are physically injured like the man in the story, or they are suffering on the
inside to the point of possibly considering taking their own life, I believe that this Church
offers a hope that changes lives. As I said at the beginning of this talk, the Bible never
actually refers to the Church (capital C) as a building or meeting place, but always to
people, the ones “called out” of the world’s society by God who calls us into His service.
And there is something else I came to realize by being a part of those retreats: our
own experiences of being the man left beaten by the side of the road can become, through
God’s grace, a source we can draw upon to help us become more truly compassionate and
helpful to the people God leads us to meet who are bloody and bruised, whether on the
inside or the outside, as we seek to live out our calling to embody Agape and truly be the
Church.