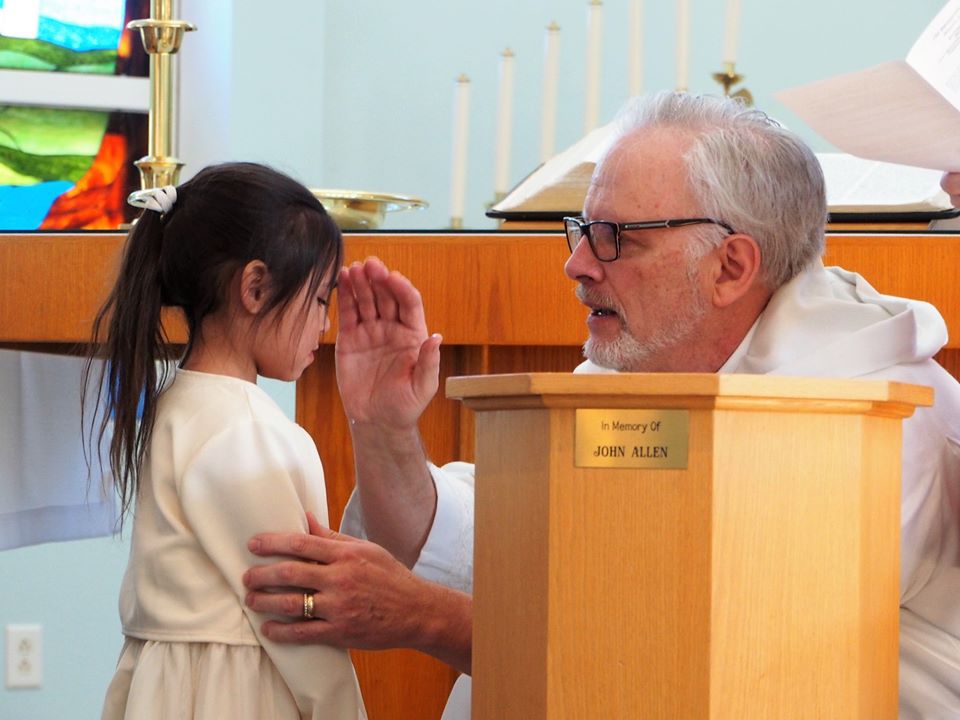 A sermon preached on February 23rd, 2020 – Transfiguration Sunday – and on the occasion of the baptism of Milania Isabella Ventola.  The sermon was based upon Matthew 17:1-9.

There is an ancient tradition that arose in Ireland that speaks of certain places being “thin” places.  These are places where sometimes the veil that separates heaven from earth is unusually thin allowing from time to time glimpses of the spiritual realm, revealing the very glory of God.

Our family made a trip to Northern Ireland last October to visit our son Bobby who was living there at the time. We experienced a certain mystery and magic to the land.  It frequently rains there but on a particularly sunny day we arrived at the Carrick Bridge on the rugged northern coast line just as the sun was setting.  It was exquisitely beautiful and there was the sense that a veil had been lifted allowing us to that in spite of the many burdens life often sends our way, life is an inherently good gift.

Mountaintops are often believed to be “thin places” and this morning we heard what is perhaps the ultimate “thin place” story recorded in the Bible.  Midway through the Gospels of Matthew, Mark and Luke we hear of a side trip Jesus made up a high mountain with three of his disciples before setting out on the long journey to the cross.

Up on the mountaintop things get weird. The very light of heaven — brighter than any earthly light – begins to shine directly through Jesus.  Moses and Elijah — people long since dead — appear on that mountaintop to converse with Jesus.  The disciples are awestruck as they gaze into the perfect love of heaven – the place where there is no death, nor hatred.  Peter always had a tendency to talk without thinking, and words begin pouring out of him.  “Lord, it is good that we are here,” he declares, and surely it is.  To catch an unfiltered glimpse of divine love — to see the place where all the tears are wiped away — that is indeed a good and holy thing to experience.

But as Peter continues to ramble on you get the impression he wants to take charge of this thin place – to make sure the veil remains permanently pulled back so that whenever they need reassurance they can come to this mountaintop and gaze once more into the glory of God.  He cries out to Jesus, “Let us make three booths, one for you and one for Moses and one for Elijah.” Let’s make this opening into the eternal realm permanent.

But we don’t control when and where thin places open up.  Suddenly there is a great cloud that overshadows the mountaintop that momentarily leaving the three disciples incapable of seeing anything.  Absolutely disoriented, unable to comprehend what is happening, they fall to their knees in fear at which point they hear the voice of God echoing the words God spoke earlier in the Gospel when Jesus himself was baptized by John:  “This is my beloved son, in whom I am well pleased. “ And to these words, three more are added:   “Listen to him.”

The cloud passes and Matthew adds this lovely little detail to the story.  Jesus comes to Peter, James and John trembling with their faces to the ground and gently touches them saying, “Get up.  Don’t be afraid,” after which he leads them back down the valley where there are severely hurting people to minister to, as well as men with evil in their hearts intent on crucifying Jesus.

It was a hard road that lay before them to travel.  But having caught a glimpse of heaven up there on the mountain, they receive the strength to shoulder the burden.

Because Jesus is down in the valley, thin places can be found there as well.  We don’t control where or when the veil will suddenly be lifted.  But it helps if we are open to the possibility that at any given moment we could find ourselves standing before such an opening.

The retired United Methodist Bishop William Willimon tells a story of a woman in a church who gave birth to a child with special needs – very special needs.  Six months later her husband walked out on her, saying he just couldn’t handle this.  Nonetheless the woman devoted herself to her son.  Her church did what they could help, but mostly they marveled at how she did handle the burden of raising little Tommy by herself with all his many needs.

Tommy lived to the age of 19 – far longer than the doctors had told his mother she could expect to have him with her.  By the time Tommy died Willimon was her pastor, and after conducting Tommy’s funeral during a quiet moment he expressed to her his admiration for the extraordinary strength and resilience she had shown in caring for her son throughout the years.

“Fortunately,” she said, “I didn’t have to do it by myself.” When Willimon asked what she meant, she proceeded to tell him a story of something that had happened when Tommy was 8.  She had been having a particularly difficult morning with the boy with one tantrum after another after another.  Finally, she said, she had had enough.  She sat Tommy down in a chair by the front window looking out on the street and angrily told him not to budge from that chair.  He was to sit there and wait for the garbage men to arrive.

The mother went down the hallway, thinking to herself she couldn’t take it anymore.  She was done.  And then she heard a sound, and she looked back down the hallway and there was little Tommy gazing out the window his mouth open, smiling in wonder at the sight of the garbage men with their truck, making little sounds of utter delight.

She said there was something about the way the sunlight shown on Tommy’s face that made him look like an angel sent to her from God.  In that moment, she felt she had been given the blessing of seeing her son the way God saw him – not as a burden, not as something broken, but as a precious, beautiful blessing.

It was only a glimpse – a brief opening of a thin place — but it was enough she said.  It kept her going through the hard years that followed.

I love Matthew’s addition to the mountaintop story — that little bit of human tenderness he describes — how Jesus reached out and touched the frightened disciples, telling them they need not be afraid.

As most of you know once a month I go to the local nursing home to lead a little worship service.  At first the people who run the place put us away from the hubbub at the nursing home, setting us up in the dining hall.  They’d wheel a handful of people down to us and we would have church together.

At some point a while back a day came when there was some kind of virus outbreak in the nursing home that kept us from using the dining hall, so they set us up in the main atrium where a great many residents pass their days.  It’s noisier there, but I have a loud voice.  Typically there are only about six people who are wheeled in to sit before me at the beginning, but gradually others join us, while others listen in from a distance.  We sing a song or two, and I babble on like Peter up on that mountaintop, rambling on about Jesus and his love.  Occasionally my voice leads the folks in their wheel chairs to doze off.

Eventually I have the good sense to shut up and then we reach the part that I think the people have patiently been waiting.  Pat Winz, Andee Milhalko and Charlie Kinsley accompany me as we approach each of the people individually and ask if we can pray for them, and if it is okay for us to lay our hands upon them as we do, and they all gladly say yes, they would like that. Their faces shine in such gratitude to be touched with the human hands that seek in our own imperfect way to convey the love of Jesus.  A thin place appears, the veil is briefly lifted.   As time has passed, more and more people accept our offer to pray for them – people who have not actually been attending our little service but is suspect listen in from afar.

This past Thursday I preached on the story of the transfiguration.  It’s one of my favorite go-to passages for preaching in nursing homes.  The story says to me that heaven is real, a truth I trust is comforting to these old folks who are nearing the end of their lives on earth.  But even as it affirms this truth of our final home in glory land, it says something else as well.  It says this life matters. To follow Jesus didn’t mean staying up on the mountaintop but rather to go with him back down into the valley to share the tender love of Jesus in this broken, hurting, often violent world. The story says to me that if we have not yet been called home to glory land, we are here for a purpose – to bear the beams of God’s love in the darkness of the valley by whatever imperfect means are available to us.

We come to church on Sunday morning hoping, I think to encounter something of a thin place – that somewhere in the course of our service we will sense the nearness of God and hear God speak to us.  We listen for what Jesus has to say to us.

Hopefully the baptism of a child is a thin place. This ordinary water combined with simple human touch becomes the outward sign of and inward and invisible grace.  Through the light that shines through this momentarily lifted veil we see little Milania for who she truly is – God’s beloved child, in who God delights.  An angel sent by God to bless us.

We know that the road ahead will often be very difficult.  Soren Kierkegaard said that “Life can only be understood backwards but must be lived forwards.”  We don’t know what the future holds, but we find the meaning of the journey in the glimpses we have been given in the past that reveals the divine light that shines in the deepest darkness.  Raising a child is holy work given to us by God, and in those times when the work is particularly challenging, we are to remember the light Jesus revealed to us this day.

Milania is God’s beloved daughter, but the evil powers of this world that diminish life – forces both beyond us and within us – these powers will tell lies to Milania – that her worth is located in how much money she has or how pretty she looks or how popular she is.  We who took vows on behalf of Milania this day are called to remember the truths revealed to us in the thin places we have encountered – such as this morning’s baptism.  No, beautiful Milania, your worth comes from a far deeper place – from the infinite light and love out of which God created you.

So let us tenderly touch one another in love and remind one another that we really don’t have to be afraid, for there really is nothing that can separate us from the everlasting love of God.