Matthew 28:16-20 — Though We Flunked, Nonetheless We Graduated 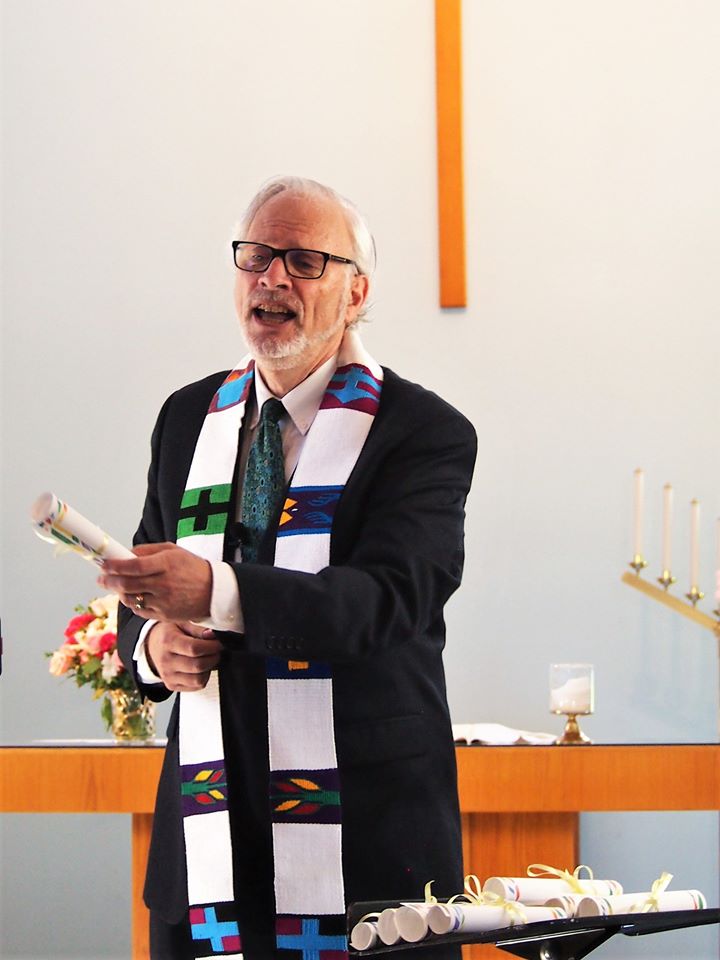 A sermon preached on June 7th, 2020 based upon on Matthew 28:16-20 entitled, “Though We Flunked, Nonetheless We Graduated”.  This was the Sunday we acknowledged our graduates who have missed out on having a graduation ceremonies, and held a pretend graduation ceremony of our own online.

Our Gospel lesson takes us to the very end of Matthew.  Once more we have an appearance of the risen Christ to his male disciples.  Prior to what we are about to read the women have gone to the tomb and found it empty, encountering first and angel and then Jesus himself who give them a message to deliver to the male disciples that they are to go to a mountain in Galilee. There Jesus will meet them.

Now the eleven disciples went to Galilee, to the mountain to which Jesus had directed them. 17When they saw him, they worshiped him; but some doubted.

Striking isn’t it?  “Some doubted.”  The only other instance in this Gospel of the word translated here as “doubt” occurs the time Peter stepped out of the boat at night to join Jesus who had walked to them on the dark waters.  Briefly Peter was able to walk on the water, but then when the wind picks up fear overtook him and he began to sink. He cried out to Jesus who brought him safely back into the boat, at which point Jesus said to Peter, “Oh you of little faith, why did you doubt?”

So the impression we are given is that the “doubt” that is being experienced here on the mountaintop isn’t that this really is Jesus standing before them raised from the dead.  No, this is the sort of doubt that overwhelmed Peter when he sank — the inability to trust that they can live the sort of life that Jesus’ resurrection requires of them — a sort of doubt in themselves, if you will to live a life worthy of the risen one.

18And Jesus came and said to them, “All authority in heaven and on earth has been given to me. 19Go therefore and make disciples of all nations, baptizing them in the name of the Father and of the Son and of the Holy Spirit, 20and teaching them to obey everything that I have commanded you. And remember, I am with you always, to the end of the age.

The first time I preached on this passage was almost exactly 38 years ago when I was finishing up a preaching class in my final semester of Divinity School.

With my mind on my graduation just a couple of weeks away, to my ear this final story in Matthew’s Gospel sounded very much like a graduation ceremony – and it’s been hard to hear it as anything but since.

In Matthew’s Gospel the teaching part of Jesus’ ministry is given greater emphasis, and so the whole Gospel reads a little bit like a class Jesus is teaching with his disciples as his pupils.

In the first chapter of his ministry Jesus calls his disciples – an odd assortment of students for sure – unlearned fishermen, a taxcollector, a political zealot – not seemingly a very promising group of students that might lead us to wonder about the admissions process Jesus set up for his school.

And then immediately after calling his twelve disciples, Jesus takes them up on a mountaintop for the first formal class session.  Jesus talks for three straight chapters – better known as the “Sermon on the Mount.”  It’s as if he is giving an overview of the syllabus – what he expects them to learn over the course of the class.

It’s challenging material, to say the least.  Don’t hide your God given light under a bushel – be who God made you to be!  And yet don’t be a “show off.”

Keep your promises.  Judge not, lest you be judged.  Don’t focus on the speck in your neighbor’s eye; keep your focus rather on getting the log out of your own eye.  In the end always be willing to forgive.  Don’t focus on treasure here on earth, whether that be money or personal status and glory, but store up instead treasure in heaven, which is to say focus yourselves on expressing love the love of God, because God loves everybody.  And the clincher:  Love your enemies.

After describing this hard path for those who would follow in his way, Jesus must have felt his students anxiety rising which is perhaps why he finished up talking about anxiety.  Do not be anxious for tomorrow, he said.  Don’t let fear rule your life and close down your capacity to love. Trust that God loves you and that God will provide what you truly need.

From that point on Jesus lightens up on the teaching, but when he does his words seem to leave his students confused.   For the most part the rest of the class seemed to be what you might call “field work” – the disciples trying to put Jesus’ teachings into practice in the world and it doesn’t go particularly well.  Their anxieties keep overwhelming them.  They get caught up in competing with one another for attention and personal glory.

They don’t seem to do very well with the quizzes and when the midterm exam occurs they are only two questions.  The first is a softball question that they can all answer with ease.  “Who to people say that I am?”  But then he asks the question that actually matters, “Who do you say that I am?” And the disciples are confused because Jesus hasn’t covered this in their class. There’s an awkward pause until Peter – the one who always seemed to have aspirations to be the star pupil – shoots up his hand and initially, at least seems to nail the correct answer.   :  “You are the messiah, the son of the Living God.”

But when Jesus proceeds to talk about going to Jerusalem to suffer and die on account of God’s love for all — which was really where all the sermon on the mount teaching was headed if they had been paying attention – Peter acts like he’s smarter than the teacher and tries to talk Jesus out of the whole dying on the cross scenario, which leads the teacher to lose it and the “A” Peter seemed to have in the bag suddenly gets flipped to an “F”.

And when they get to what you might call the “final exam” – the events that transpire the night Jesus is arrested – well it seems clear they all flunk.  Peter bragged at the Last Supper about how he was locked in on an A and then proceeds to flunk in a particularly humiliating way when three times he replies to the inquiries of people into the crowd by declaring, “I never knew the man!” which on one level is an out and out lie and an indication he hasn’t mastered the anxiety thing – his fear getting the better of him — and yet on another level seems strangely the truth:   If the ultimate goal of the class was to really know Jesus, well after all this time, it seems he has failed.

That’s the background to this morning’s graduation ceremony.  The angel at the tomb – who seems to be playing the part of the registrar in the story – sends word via the women that after all was said and done the students have somehow “passed” and are to show up for the graduation ceremony which will take place on a particularly majestic setting on a mountaintop in Galilee.

So they are all arrive at the appointed time — with the exception of Judas, and you almost get the feeling if he hadn’t flunked himself, well maybe even he’d have been welcome there too.

And though there is no mention of Jesus giving out diplomas, he definitely give a commencement speech, which in a certain way resembles every other commencement speech you’ve heard, talking about how they are being sent out into this world.

As I noted before, Matthew tells us that there was some degree of doubt present among the disciples when they arrived at the graduation ceremony – doubt that they deserved their diplomas after how poorly they had performed in class – but the first thing Jesus says in his speech is that all authority in heaven on earth has been given to him which, among other things would imply that he has the authority to declare them worthy of graduating and who are they to question his authority?

The heart of his speech is a rousing call to action:    “Go and make disciples of all nations, baptizing them in the name of the Father and of the Son and of the Holy Spirit.” From now on they are to be teachers who teach all people to obey everything Jesus has taught them — all that stuff about loving their enemies along with all the other hard stuff he taught them in the opening class.  And surely as he was saying these words some of them must have been thinking, “Who the heck am I to be teaching this stuff since I so obviously haven’t mastered the material myself?”

And I’m certain Jesus was aware that they were thinking such thoughts, because he brings his speech on home with this extraordinary promise:  “And lo, I am with you unto the end of the age.”

They aren’t alone.  And neither are we.  Jesus is with us.

And so in the end we have something that is simultaneously very hard – a way of living that isn’t for the faint of heart – and yet simultaneously full of grace – we will be loved in spite of the near certainty we will fall short.

We are to hold the two together.  This way he has commanded us to follow is hard.  Continually attending to the things that keep ourselves from seeing clearly, refraining from our impulse to judge others, living by forgiveness, loving all people, including our enemies, and not letting our fears close down our hearts – it’s all very hard, isn’t it?    And if truth be said, in the context of both epidemic and the crisis that has broken out in the streets of our cities with protests over racial injustice as well as the unfortunate rioting and looting that has taken place on the edges of some of these protests, all of us are having moments when we too are flunking the class miserably – succumbing to our anxieties and picking and choosing who we will love – refusing to put in the hard work of understanding the point of view of others.

We stumble and fall – we fail – but Jesus lifts up time and again and sends us out to keep try – keep practicing – reassured that we aren’t alone as we try yet again, even when it feels that we are.