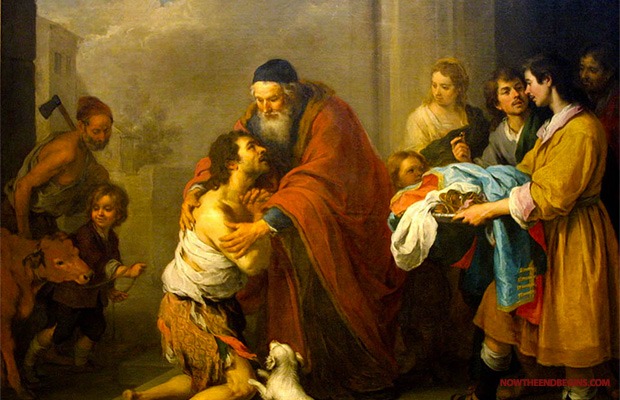 Yesterday, we read about the two opposing understanding of holiness and how the Holiness Code led the scribes and Pharisees to condemn Jesus for seeking out the company of “tax collectors and sinners.”  For Jesus this was a “teaching moment” as they say.

Our reading skips over two shorter parables.  Both involve something lost, that is then found and the rejoicing that ensued, in one instance a woman who finds a coin she lost somewhere in her house and in the other a Good Shepherd who goes to great lengths to seek out and find one lost sheep.

Then Jesus proceeded with a third parable:

So (Jesus) told them this parable:

It is hard for us to grasp, just how deeply offensive what the younger son has done, in the context of ancient Jewish culture.  In asking for his share of the inheritance, before his father’s death, the son is declaring that he would essentially prefer his father be dead.

The son squanders his inheritance on a hedonistic binge, so with no remaining inheritance, there really isn’t any possibility of making amends for his initial cruelty towards his father.  He ends up in —at— “rock bottom” accentuated in Jesus’ telling by the fact, that the only job he can get is tending to pigs – a ritually unclean animals for Jews.

Jesus tells his tale, at this point, in a way that is somewhat ambiguous.  Starving to death, Jesus tells us the young man “came to himself.”  What does that mean?  Is this a sign of true remorse, or Is this just a pragmatic assessment of the fact that back on his father’s farm the hired hands are eating better, than he is in the far country.

He comes up with a plan and rehearses a speech, he will make to his father.  Does he mean what he is saying, or is this just a calculated attempt to appeal to his father’s mercy?

It is interesting, that Jesus doesn’t make this obvious.   The significance of this is that, in our usual way of seeing things we want to believe, that the son was truly remorseful and as a result the father forgave him.

But that’s not what the father’s actions indicate.  “But while (the son) was still far off, his father saw him and was filled with compassion; he ran and put his arms around him and kissed him.”  The impression we have is that through the months and years the father has been keeping watch, hoping one day to see him returning home, and that now with his homecoming the father isn’t particularly interested in hearing the son’s well-rehearsed speech.  The father is focused on throwing a big party to celebrate the son’s return.

It would have been shocking for Jesus’ listeners to hear of a father behaving this way.  “Where is your sense of dignity, man? Considering what your son’s done, you shouldn’t even allow him to return home.  If you decide you must allow him to come back home, punish him severely.  Make sure he grovels before you for a good long time.  And for God’s sake don’t run to him, exposing your bare heels.  It’s okay for mothers, to do that sort of thing, but not a proud Jewish father!”

So it’s kind of crazy.  So here’s a question:  returning home, is the son a changed man?  We want to believe so, and there is good reason for this hope since at the end, the son is in the “party.” The “party” is a metaphor for the Kingdom of God.

Nonetheless, the one absolutely clear thing in the story is how the father feels about this son.  He’s wildly, crazily in love with him.

So, if the Father represents God, what’s that tell us?

I didn’t come up with this parable; Jesus did.  Are we sure we want to be following this guy?