Wednesday, March 13 — God Meets Us in the Deep Darkness 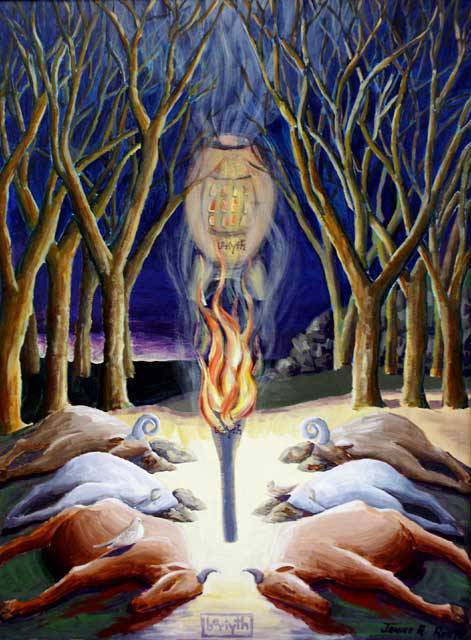 Where we left off yesterday, God was talking Abram down from his despair.  We were told Abram believed God’s promise that the day was coming when Sarah would give birth to a child and that countless descendants would follow afterwards in the future.  But Abram isn’t finished with his doubts.  In today’s reading we hear Abram questioning the second part of God’s promise.  Abram needs reassurance that there truly will be a future homeland for his offspring.

Sometimes it is a minute by minute struggle to place our trust in God.

In short order the story turns down right creepy.

Then (the LORD) said to (Abram), “I am the LORD who brought you from Ur of the Chaldeans, to give you this land to possess.”
But he said, “O Lord GOD, how am I to know that I shall possess it?”

He said to him, “Bring me a heifer three years old, a female goat three years old, a ram three years old, a turtledove, and a young pigeon.”
He brought him all these and cut them in two, laying each half over against the other; but he did not cut the birds in two.
And when birds of prey came down on the carcasses, Abram drove them away.
As the sun was going down, a deep sleep fell upon Abram, and a deep and terrifying darkness descended upon him.
When the sun had gone down and it was dark, a smoking fire pot and a flaming torch passed between these pieces.
On that day the LORD made a covenant with Abram, saying, “To your descendants I give this land, from the river of Egypt to the great river, the river Euphrates….”

In the ancient world a covenant – a contractual agreement – would be formalized between two parties through a ceremony like the one that is described here.  Animals would be sacrificed and their carcasses split in two with a walkway created between the two parts of these carcasses.  The two parties entering the covenantal relationship would walk this walkway in essence saying, “If I fail to keep my part of the covenant may the same fate come to me as has come to these animals.”

In this instance, however once the preparations have been made God takes over as the active agent in the ceremony. Abram descends into a deep sleep and in a dream state “a deep and terrifying darkness descended upon him.”  Abram is a totally passive recipient of the blessing of the covenant.  He witnesses a flaming pot – a symbol for the presence of the Holy God – passing through the split corpses of the sacrificial animals.

From a Christian point of view, this ancient covenantal ceremony conjures up a new covenant that was established between God and humanity thousands of years later – the one of which Jesus spoke at the Last Supper. Once again God is the active agent and we are the passive recipients of the blessing rendered. Once more a “deep and terrifying darkness” descends as the covenant is sealed, with Jesus dying on the cross.

There are basically two interpretations of what took place on the cross.  One is that the sins of humanity required punishment and Jesus as the one and only purely innocent sacrificial lamb took upon himself the punishment we had coming to us.  Personally, this doesn’t work for me.  The God revealed by such a notion comes across as sadistic, and lacking a capacity for forgiveness.

I prefer the other interpretation:  On the cross we see the extraordinary lengths to which God will go to stay in relationship with us.  God meets us in the deepest darkness.  Seeing clearly the nature of God’s love, the question then becomes: How will I respond to such wondrous love?