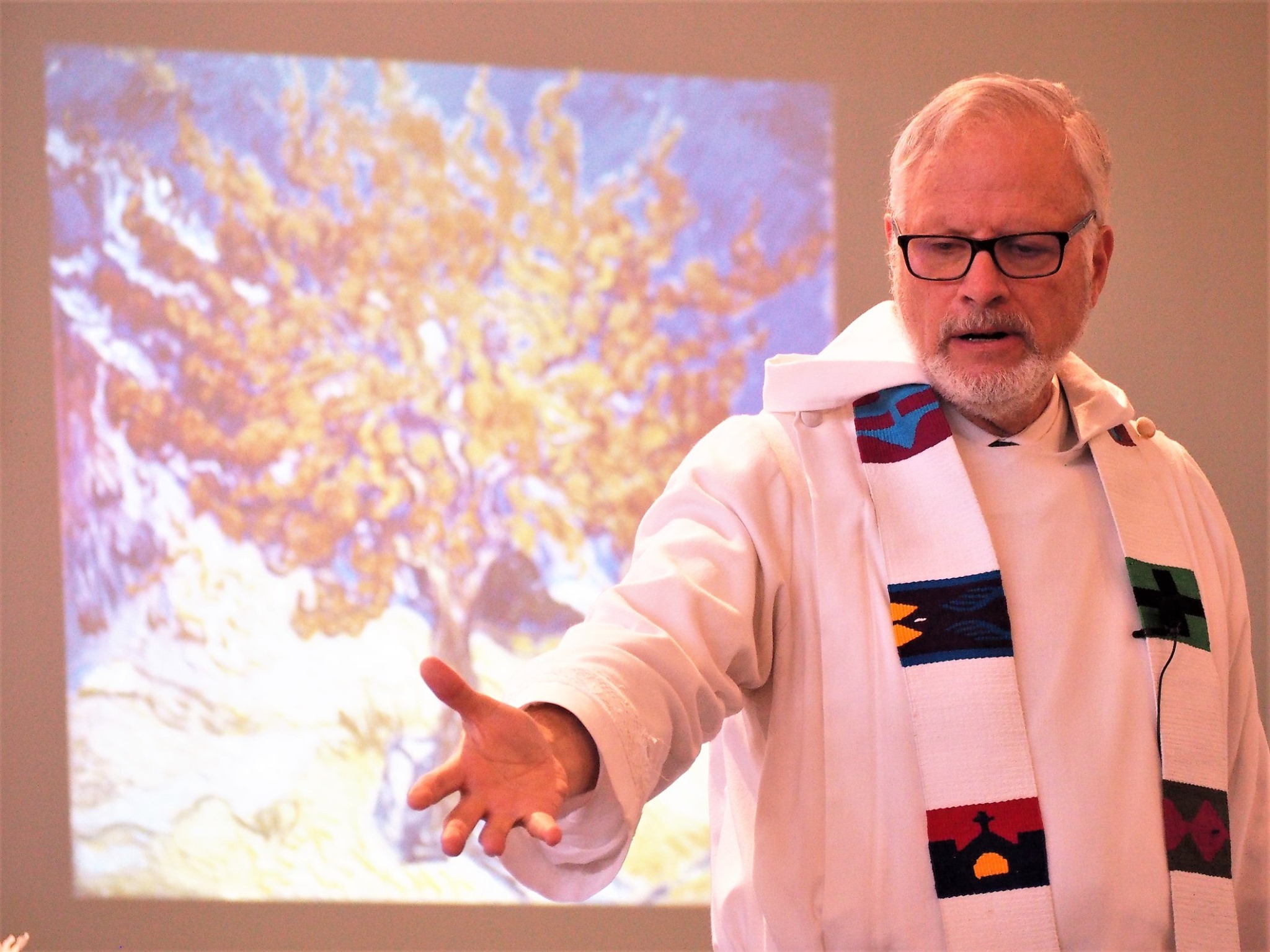 There are at least two potentially distracting pieces of this short passage we just heard.

The first is where Jesus says, “If you had faith the size of a mustard seed, you could say this mulberry tree, ‘Be uprooted and planted in the sea,’ and it would obey you.”  It can sound as if possessing true faith endows a person with magical powers, and some preachers have taken this idea and run with it because, I mean who wouldn’t like to possess magical powers?  Struggling financially? Just believe and don’t doubt and God will make you a millionaire.  The doctor diagnosed a cancer tumor?  Just have enough faith and pray, and you can be assured that the tumor will disappear.

Although things we call miracles do sometimes occur when people pray, faith isn’t a magical power that suddenly allows us to control all aspects of our fate. The particularly dangerous part of such an interpretation is that the person whose prayers do not get the result hoped for is left feeling as if it were somehow their fault.  They didn’t have enough faith.  “The tumor is spreading?  I must have failed to believe hard enough.”

The Bible is full of “faithful” people who pour out their soul with doubts and questions.  Struggling with uncertainty is a part of what it means to be a human being – it’s not a failure on our part.

The other problematic piece is the second half of what Jesus said – Jesus using the image of a Master and slave to talk about the life of discipleship.  When there were slaves in this country working plantations, I am certain there were “Christian” slaveholders who quoted this passage to justify their abuse of their slaves, telling them misery was God’s will for their lives.

So what was Jesus trying to say in this passage?

First, we have to ask what Jesus meant by faith, and that isn’t altogether easy to answer because he never gave a “definition” and uses the word in a variety of contexts.  He used parables to talk about it, and identified faith in certain people he met.

What IS clear is what Jesus didn’t mean by “faith.”  It’s not mental assent to certain creeds or dogmas.  He saw faith in action in all kinds of surprising people well before his death and resurrection, so for Jesus, faith certainly did not mean what certain preachers will tell you, which is that faith is believing that Jesus was God’s son sent to die for your sins – a belief required to have your passport stamped for heaven.  “Faith” for Jesus certainly isn’t believing that the Bible is the inerrant word of God.  He never said any such thing.

For Jesus faith is connected to three words:  Trust, persistence and obedience.

Faith means trusting that God loves us and wants only good for us.  The night Jesus was out in a boat with his disciples and a storm suddenly arose, scaring the bejesus out of them, he rebukes them for allowing their fear to totally wipe out their trust in God.

Faith means persisting on the journey of life even when the road is rough and the path dimly lit.   Jesus told a story about a poor widow who kept knocking at the door of an unjust judge – evidently for years and years – never giving up until finally justice was rendered.

And finally faith means obedience.  Faith involves the willingness to do God’s will – essentially, to love like Jesus.

In this particular context, obedience seems to be the aspect of faith that is being emphasized here, because the disciples’ cry of, “Increase our faith!” comes immediately after Jesus commands them to forgive people who have wounded them, letting go of that hard place in their hearts, and to do this over and over and over again.  Jesus says this, and his disciples are thinking to themselves, “I don’t think I have the faith to obey the Lord in this way. I’m too attached to my hurt, my anger.”

And it is obedience that Jesus is emphasizing when he goes on to talk about the servant obeying the commands of the master.

Faith is better understood as a verb:  It’s trusting, persevering, obeying.  It is something we do.

The disciples are thinking of faith more as a noun. They cry out to Jesus to give them some sort of permanent, unshakeable possession that they’re calling “faith,” and Jesus answer is challenging their premise.

At this given moment you may not be trusting, or persevering, or obeying.  But that doesn’t mean that in that in the future, perhaps in some small, mustard seed-like way, you will trust, persevere, and obey.

A seed can be planted in the earth and on the surface there can be no indication that the seed is there.  In arid places such as where Jesus lived a seed could remain in the earth for a very long time without cracking open, without sprouting until finally the rains come and suddenly the seed kicks into action and does what a seed was created to do.

So I think Jesus was giving his disciples some reassurance.  “Chill, guys.  You do faith, which is to say that contrary to outward appearances at the moment you have a profound capacity for trust, for perseverance, and for obedience to my commands. Right now this capacity may seem absent, but it’s there.”

As a preacher, I’m in the business of sowing seeds, and most of the time I have no idea whether those seeds ever get planted, let alone break open and sprout.  Sometimes this inability to see what the seeds are doing is discouraging, raising questions in my mind regarding my own faith.

Consequently, one of the most heartening things anybody ever told me was said by a member of our congregation who told me that for years she had been estranged from her now elderly father.  She hadn’t spoken to him for years, and for very understandable reasons:  growing up her father had been truly cruel to both her mother and to herself.

But she said that after the drip, drip, drip of listening to me preach about God’s love and how God intends to soften our hardened hearts she went home one day and in obedience to the command of Jesus to forgive, she called her father on the phone, reconnecting with him, which in turn led to reconciliation for other family members as well – including a sister who made peace with her father before not long afterwards departing from this earth.

When she told me this story, I was given grace to persevere in my calling, trusting that seeds are getting planted.

If faith is better understood as a verb than a noun, than perhaps mustard seed faith can be understood as taking baby steps of faith.

If you feel like fear has altogether overtaken you, what would be a small step in expressing trust in God?  A deep breath of letting go?  A simple word of prayer?  In what small way might I take action in spite of my fear?

If you feel overwhelmed with feelings that seem distinctly unloving – feelings that lead you to harden your heart — what small thing might you do that moves in the direction of love?  Sometimes might be just holding your tongue — sometimes a simple kind word.

Part of what I think Jesus is saying with the image of the servant working the fields, tending the sheep, serving supper is that faithfulness is most often lived out in fairly mundane ways.  Doing the tasks assigned to us with a spirit of love.

Mother Teresa said, “We can do no great things, only small things with great love.”

It is interesting to listen to that part about the “unworthy” slave and the master’s table in relation to Holy Communion.  What gets us invited to the Master’s Table?

Here in the Methodist Church we invite little children to share in Holy Communion.  Some people are troubled by this.  “They haven’t learned what this means!”

The primary way you can screw up Holy Communion is not by failing to understand the Biblical roots and its various meaning rather it’s thinking that somehow you’ve earned your place at the Master’s table.  Holy Communion is screwed up when we think our knowledge, or our seeming good and faithful lives have some how made us worthy of coming to the table, which implies more worthy than others.

No, none of earn the invitation to come to the table.   The invitation is pure grace.  Jesus welcomes all of us, in spite of the various ways we are broken, the ways we have failed and sinned and struggled with the dark powers.  We are all in this together.