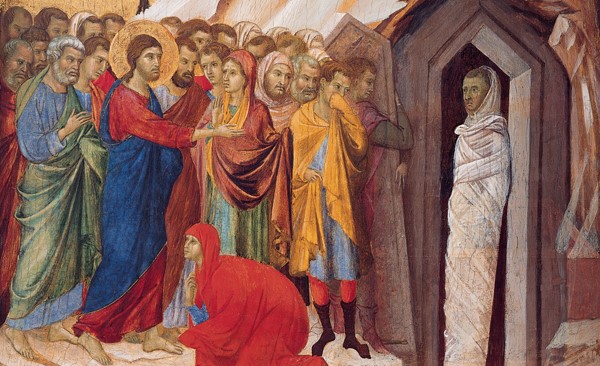 The story of Jesus raising Lazarus from the tomb is one of the best known stories in the Gospels, but if you read it carefully with its  lengthy build up, you will likely agree with me when I say it is confounding.

One of the things that gets emphasized uniquely in John’s Gospel is that the love that Jesus embodied included the tender love of friends.  We are told that Lazarus was Jesus’ friend, a part of a family that was dear to his heart that included his sisters Mary and Martha.

While Jesus is off wandering the countryside, Lazarus becomes deathly ill.  Mary and Martha send word to Jesus, “Lord, he whom you love is ill.”  Clearly, this is a call for Jesus to come and use his remarkable healing powers to restore Lazarus to health and keep him from dying, and the appeal is made on the basis of friendship.  True friends are obliged to show up in desperate times of need.

When Jesus receives the message, in spite of understanding the gravity of Lazarus’ sickness, he delays setting out for Bethany where his friends live.  In spite of his sister’s desperate plea, Jesus intentionally allows Lazarus to die.  When Jesus finally arrives Lazarus’ body has already been in the tomb for four days.

Clearly, Jesus has known from the outset that he will raise Lazarus from the dead, nonetheless he allows Mary and Martha to go through the heart-wrenching pain of watching their beloved brother die.  This is part of what I mean when I say the story is confounding.

When Jesus arrives in Bethany,  Martha comes out to meet him. Along with her great heart break there is clearly some anger directed at Jesus for his failure to immediately come to the rescue.   Jesus says to her, “I am the resurrection and the life”, essentially telling Martha to put her trust in him – she need not be distressed.

Martha goes to tell her sister Mary that Jesus has arrived, and Mary runs to Jesus, which is where we pick up the story in the 32nd verse of the 11th chapter of John’s Gospel.

When Mary came where Jesus was and saw him, she knelt at his feet and said to him, ‘Lord, if you had been here, my brother would not have died.’ When Jesus saw her weeping, and the Jews who came with her also weeping, he was greatly disturbed in spirit and deeply moved. He said, ‘Where have you laid him?’ They said to him, ‘Lord, come and see.’ Jesus began to weep.

(Jesus weeps.  This is another part of what’s so confounding about this story:  Although Jesus knew he was going to raise Lazarus from the dead and says to the sisters they need not be alarmed, he himself yet weeps when he get’ to Lazarus’ tomb.  Why?)

So the Jews said, ‘See how he loved him!’ But some of them said, ‘Could not he who opened the eyes of the blind man have kept this man from dying?’

Then Jesus, again greatly disturbed, came to the tomb. It was a cave, and a stone was lying against it. Jesus said, ‘Take away the stone.’ Martha, the sister of the dead man, said to him, ‘Lord, already there is a stench because he has been dead for four days.’ Jesus said to her, ‘Did I not tell you that if you believed, you would see the glory of God?’ So they took away the stone. And Jesus looked upwards and said, ‘Father, I thank you for having heard me. I knew that you always hear me, but I have said this for the sake of the crowd standing here, so that they may believe that you sent me.’ When he had said this, he cried with a loud voice, ‘Lazarus, come out!’ The dead man came out, his hands and feet bound with strips of cloth, and his face wrapped in a cloth. Jesus said to them, ‘Unbind him, and let him go.’

Hopefully you can see what I mean when I say this story is confounding.  Jesus loves this family, but he intentionally lets Lazarus die, which means allowing them to go through the terrible pain of their hearts breaking.  He tells them not to trust him – that they need not be afraid in the face of Lazarus’ death.  Earlier he had told the disciples that Lazarus’ death was really a kind of sleep, implying almost that death is a kind of illusion.

And yet when he gets to the graveside Jesus weeps. It’s baffling, to say the least.

In the past when I’ve preached on this story the interpretation I offered arose from the fact that throughout John’s Gospel when the group identified as “the Jews” make observations about what is going on they consistently get it wrong.  Here as they observe Jesus weeping, they attribute his tears to the depth of his love for Lazarus, so the pattern implies they have this wrong.

I suggested that Jesus is weeping not out of grief for Lazarus but rather in compassion for the pain that Mary and Martha and all we humans suffer as we find ourselves intimidated by the great bully that is death.

That’s a valid interpretation, but this time around it strikes me as important to affirm that Jesus really is weeping for his friend.  If Jesus hadn’t cried, I think the message received from this story could ultimately be harmful.

One side of the truth being pointed to in this story is this:  It is true that ultimately death is something of which we need not be afraid.  It’s not the end.  When our physical bodies die, there is an essence of who we are that lives on in a what Paul called our “resurrection body” – that in Christ we go to be with God in God’s eternal love, freed from the suffering of this life.

But the other part of the truth is this:  it really hurts to lose somebody we love, and the pain of grief is unavoidable.   Allowing ourselves to feel the pain of grief is vitally important for the health of our souls.  Although we have the promise that one day all the tears will be wiped away, in the meantime tears hold a holy place in this life.

The only way to avoid the searing pain of grief is to live a life in which we avoid letting other people into our hearts.  But in a certain sense that would lead to an even greater form of grief – the grief of having missed one’s chance to live a life worth living.

We are here to love one another, and part of what this means is that we take one another into our hearts and that in doing so we open ourselves up to the inevitable suffering that is the pain of grief. Inevitably we will lose the people we allow into our hearts, whether because they leave us, or they die, or because we ourselves must die.

But the world in various ways encourages us to avoid confronting the pain of grief.  We are encouraged to attach ourselves to things rather than people.  We are offered countless distractions to keep us from feeling our grief. Sometimes this encouragement comes as a misguided understanding of what it means to be faithful.  For instance, if Jesus has defeated death and our loved ones are in a better place why are we feeling sad?  This I think could have been the message of this story if Jesus had not wept at the tomb for his friend Lazarus.  His tears force us to acknowledge the second truth of the paradox.

In the light of the truth that grieving is something we are called to embrace — a cross we must bear rather than avoid because it is inseparable from love – Jesus allowing his friends Mary and Martha to enter into the experience begins to make sense.

There’s a notion deeply ingrained in our culture that real grown-up people don’t get bogged down in grief. It’s expressed in the saying “real men don’t cry”, or the song, “Big Girls Don’t Cry”.

On one level the idea being expressed is understandable.  As we grow up, we do need to gain some degree of control over our emotions in order to function productively in this world. Nonetheless, there are times as Jesus demonstrates when tears are precisely what’s called for.

There were several years in my early adult life when I essentially never cried – to a certain extent, couldn’t cry.  This is not uncommon, especially for men.  If you’re focused on trying to get things accomplished in this world which tends to be the focus of young adult years, grieving for our losses can certainly get in the way of crossing off items on our “to do” list.

As I’ve grown older, tears have come to me more readily and I take this as a sign of some healing that has taken place inside me over time.  The inability to embrace grieving leads to kind of soul wound.  Long ago I heard a saying that stuck with me: “Tears are the lubricant of the Holy Spirit.”  This makes sense to me.  It is only in allowing ourselves to grieve that God can work on the inside through the Holy Spirit to heal the soul wounds of our losses.

Generally speaking, the older we get the more life forces us to acknowledge that experiences of loss are unavoidable.

There are truths revealed to us when we allow ourselves to grieve. The preciousness of life and the importance of the people in our lives.  It also reveals this – that we are all in this together – all connected.  To be human is to experience the pain of grief – it doesn’t matter what religion you are, what race you are, what political party you belong to – grief connects us all.

But since grief is painful – and grief leaves us feeling so out of control – it’s understandable that we try to avoid it.  And one way we avoid it is to choose to be angry – find somebody to blame – instead of feeling the deep sadness that is a part of life.  You see some of this in the experience of Mary and Martha as they unleash anger towards Jesus for failing to get there in time.

And this, I would suggest is one way to understand all the anger and divisiveness that is so prevalent in our society.  There is a great deal of grief – the experience of loss – in all its many forms.  The technologies we now possess include so many more ways to avoid facing directly our feelings of grief.  It’s buried inside us, and anger is in a certain sense a defense mechanism we use to avoid our grief.

There would be great healing of these divisions if collectively we could embrace this fundamental experience that unites us all.

In a few minutes, once again we will share the sacrament of Holy Communion.  We remember Jesus’ Last Supper with his friends – an experience in which deep grief and sadness was present.  This sacrament invites us into this holy paradox of which I’ve been speaking.  We are invited to embrace our own grief, knowing Jesus meets us in our mourning, and knowing also that we commune with all who grieve – all humanity. Simultaneously we celebrate the truth that by entering death, Jesus has overcome death.  A love is revealed in Jesus self-offering from which death cannot separate us.