What Were You Arguing about along the Way? 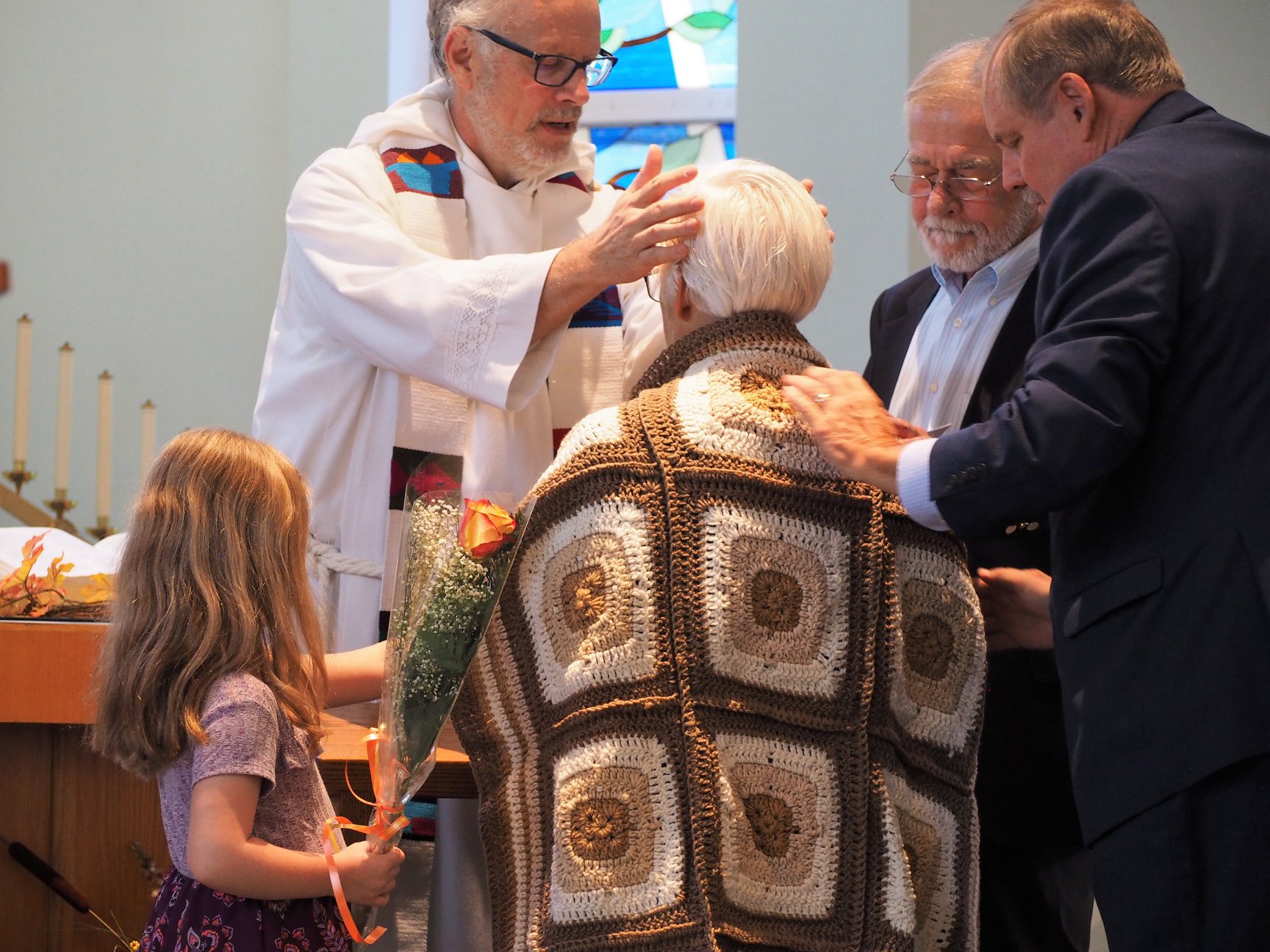 A sermon preached on September 23rd, 2018 based upon Mark 8:30 – 37, on the occasion of reception of three new members, entitled, “What Were You Arguing about along the Way?”

Last week I said that it is often more helpful to think of the Bible – and especially the Gospels – as a “question book” rather than an “answer book.”  Jesus asks us questions in the Gospels — questions that we don’t answer once and for all but rather questions which we are called to answer each day of our lives.

One of those questions is in our story this morning.

But first, let’s put the question in context.   When the disciples first decided to leave everything to follow Jesus around the countryside they would have been hard pressed to explain why they had made such a seemingly crazy decision.  They had witnessed his extraordinary powers for good.  They recognized that he was in a way unlike any other a truly great man.

In short order that sense of his greatness was confirmed by the standard measurements of greatness in this world:  He began drawing great crowds of people.  In Galilee, the northern country of Jewish Palestine Jesus quickly achieved rock star status — becoming the most popular man alive.

But midway way this great man begins in ways that were deeply puzzling to the disciples.  After reaching a frenzy of popularity, Jesus begins to avoid crowds.  Whereas most leaders when they get a taste of adoring crowds of people get intoxicated by it and need to keep experiencing it, indeed more and more of it, Jesus seems altogether free from this addiction.

He leaves Galilee to enter Gentile territory where he is less likely to attract the attention of crowds.  He seems to be more focused on teaching his disciples some hard truth.  Last week we heard how Jesus asked his disciples  who did they say that he was with Peter giving the “right answer”: Jesus is the messiah, the son of the living God.   He immediately proceeded to stun them by announcing that as the messiah he must go to Jerusalem and suffer and die and rise again, and that if they would be his disciples they must deny themselves and take up their cross as well.

So now in our reading this morning Jesus has led them back into Galilee where the adoring masses await him, but we are told he specifically doesn’t want anybody to know he is back.  Which I suspect displeased the disciples because when you are the closest associates of a great man for whom thousands of fans are cheering, well some of that greatness rubs off on you as well.

But Jesus doesn’t want crowds — he wants to go deep in his teaching with his disciples.  And so for a second time he tells them how he will suffer and die and rise again.  That his way is the way of the cross.

In other words, just as his popularity in Galilee is demonstrating that he is the very definition of greatness and success in the eyes of the world Jesus intends to throw away that worldly popularity and success.  He is going to allow himself to be seen as what the world will view as an utter failure.

So they reach Capernaum and with draws into a house where he proceeds to ask this morning’s question to his disciples:  “What were they arguing about along the way?”

As they travelled there had been whispered heated discussions.  They thought they had kept the master from knowing, but he knew.  They were arguing about what many of our arguments at their most basic level are about:  Which of them were the greatest, the most important, the one with the most understanding, the one who was “right”, the one who had done the most on behalf of their little group.  “You’d be lost without me!”

That’s where our minds go, isn’t it? when we’re feeling anxious and insecure. We grasp after the techniques the world has taught us to try and reassure ourselves of our worth and importance – locating ourselves on the ladder of status in a way that we can look down on others.

Jesus asks the question and immediately the disciples stop talking because in the asking of the question they know! they know that what had seemed so important to them just a few minutes before – an argument that in the moment had seemed essential to win – suddenly is recognized as an argument over nothing that matters at all.

And so, “What were you arguing about along the way?” is a question Jesus asks of us as well.  We have had such arguments with others, but in truth the place where the argument is carried out most extensively is inside our own little heads.  We replay arguments with other people – some comment they said which seemed to somehow diminish our worth, trying out rebuttals and compulsively attempting to figure out a way the next time to come out on top.  And when we engage in this kind of internal arguments it hardens and constricts our hearts, which is precisely the opposite of living out of the reality of the kingdom of God.

At this point in the story Jesus sits down, which in those days is what a rabbi did when he had an important point to make. And he took up in his lap some scrawny, dirty little kid and said that if you wanted to be first you had to be last – the servant of all.  He said that whoever received a child like the one in his lap was receiving him.

Now on one level we get what Jesus was getting at by holding a child in his lap.  Children are the vulnerable ones, the impressionable ones, the ones so in need of care.  Karl Menninger said that the wound we inflict on children they will in turn inflict upon the world. The care of children is of utmost importance.

But on another level we don’t get what Jesus was talking about because we view children quite differently than people did back in Jesus’ day, and throughout most of human history.  Sure, parents loved their children back then but the significance of children at this moment for Jesus was that they were the ones at the very bottom rung of the status ladder.  They had no legal rights.  They couldn’t do any significant work for you, or pay you money, or give any boost in your status by giving them your time and attention.  They represent the person who in serving there is nothing for you to get in return in a worldly sense.

If Jesus were here today and trying to make the same point he probably wouldn’t have taken one of our children in his lap.  We live in a culture where we almost idolize children – we strive to give our children every possible opportunity structuring our schedules around our children’s lives.  No, Jesus would more likely have taken a homeless, mentally ill street person in his lap — or an illegal alien in a detention center or particularly the child of an illegal alien.

True greatness, Jesus said is through serving such as these.  It’s not about getting our egos stroked, which is why Jesus said we must deny ourselves, because that’s what our egos always wants – some sort of stroking that tells us we are worthy because we are better than others.

We are to serve people like this not because it’s a nice idea but rather because, Jesus declared, it was simple and utter truth:  that every single person is of infinite worth – a child of the great and glorious God.

There are these two opposing views of reality:  There is the one that views our worth as based upon where we stack up on the world’s ladder of status.  And then there is God’s view – the reality of the kingdom of God – in which  every single human being is recognized as being of sacred worth and equally valuable.

So on this day in which we have been blessed with the gift of three persons who have chosen to enter our circle of God’s love with Jesus at the middle Jesus addresses questions to us.  Are we willing to live together as the church out of the reality of the Kingdom of God?

And since this sort of need and pain is often hidden beneath the surface it requires a great attentiveness on our parts, a willingness to watch and listen carefully.

Sarah and I talked to our son Bobby last night who is away at his college.  Word had just begun to spread through his campus of a student who had taken their own lives greatly disturbing Bobby and all of his classmates.  In all likelihood the weight of the burden of this child was largely hidden away, unrecognized by others who weren’t paying careful attention.

Our capacity to pay attention in this way gets lost when we get dragged back into the worldview of the world – that’s what our story this morning tells us.  The disciples even as they were “following” Jesus fell back into that ongoing argument of “who is the greatest?” anxiously consumed with the question of where they stood on the status ladder.

And so we must answer Jesus’ question daily, “What were you arguing about along the way?”  Saint Fred Rogers was asked the secret of greatness.  He said it involved three things.  The first was kindness. The second was kindness. And the third was kindness.  As the saying goes: be gentle with everyone you meet, for everyone is fighting a great battle.